I do believe men will fancy fat women when girls stop fancying accomplished men. By that, I mean, never.

There is from time to time a load of childish whining in the media where we hear some rhetoric as to why these selfish men pigs should stop being sexist and start fancying fat girls. They then try to reason and shame male readers into altering their sexual preferences. This is the height of futility, delusion and entitlement.

Women are attracted to utility in men. For women, it’s usually and firstly more important who a man IS than what he looks like. They are more forgiving of a few extra pounds. I know a few fat lads who date top drawer women. Sure, women do appreciate a good body, I am not saying they don’t, but don’t let that fact distract you from the fact that the main thing is a man’s character, his achievement, his ability to inspire her and others. The body is a bonus.

Men don’t look for utility much in women because they don’t need it. Men are utility. Men like gentle, caring women wrapped up in a genetically sound package. For this reason men filter usually by looks. We appreciate a brain and a good character and often won’t date a woman without, but we can tell by looking if she is beautiful. If she is, then she gets to be on the romantic radar.

This is why women like a man to have a good job. Men don’t so much require this in a woman. I don’t think many young girls realize this as they chase careers and think they’re going to settle down in their 30s. They are losing their sexual market value and replacing it with a career. A career has value, sure, but it doesn’t have much sexual market value. So in terms of competing on the dating scene, a career woman is taking a big risk.

Now, the extent to which a girl has to be bright, accomplished and inspiring is not so much. The bar is set lower for women for men. I don’t give a damn what my girl’s job is or what her CV looks like. It’s great if she has her shit together, but give me a 22 year old, kind and gentle student with no money over a 35 year old angry lawyer any day.

There are other factors too, and these can impact men, unless in the extremely rare case of illness, being overweight is horrible to look at and simply demonstrates laziness and a lack of respect. Women may not tolerate a very fat oaf, but a slightly overweight achiever with a bit of charm may cut the mustard.

So instead of writing long articles complaining that people won’t fancy you for being lazy and obnoxious, consider just being a bit more responsible and looking after yourself. 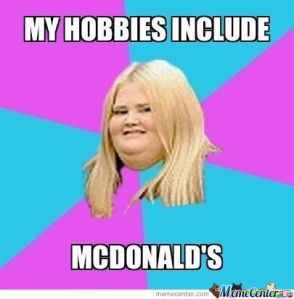 Otherwise just accept the fact that if as a girl you get fat, then you are going to have to live with a lower value on the dating market in just the same way as a lazy man would.

Go to Eastern Europe, the girls over there are more often than not slim and healthy and they aren’t all exercising their way to exhaustion – they’re just not eating lots of chips and drinking lots of alcohol. I spend a lot of my time in Eastern Europe and this is exactly how the British (girls) are seen – fat, drunk, entitled and overweight. That’s not just my opinion, that’s what I get told.

I do try to stick up for the English, but it’s kind of hard when I am in a bar in Zagreb and when British girls walk in they are generally always shaped like apples, sweaty and drunk. Once this has happened several times it’s hard for me to have any credibility and to be honest, why would I bother.

There’s more though. Even when girls in England are pretty, they often have a highly contemptuous attitude towards men. The girls over there are not only beautiful, feminine and slim, they also admire men too. Imagine that. The Eastern European girls just haven’t had years of feminist propaganda telling them men are lazy, incompetent rapists.

So you can date a fat English girl who is contemptuous of men or a slim, beautiful Polish girl who hold you in high esteem.

I can see a generation of English cat ladies on the horizon.