Tax Evasion – Illegally withholding or not declaring funds that are taxable.

Starbucks are/were tax avoiders. I think most of us will remember the explosion of vitriol against them around two years ago when they we’re ‘exposed’ for not paying more tax than they are obliged. It’s a while back so I may not be 100% on exactly what happened. If I am wrong about Starbucks, then just change the name Starbucks to any company who is tax efficient, especially if they are denounced for it. This really doesn’t have to be about Starbucks.

I remember when it all happened a few people I know said such things as ‘well, I won’t be drinking Starbucks anymore; I’ll be going to [insert name of any other coffee outlet].

I always found that to be a destructive, ill thought out and possibly even immoral position to take. As soon as I learn that a company pays little tax, I see it as a selling point, it’s a further benefit to that brand, a further reason to consider giving them MORE of my business. To choose to buy from companies which are tax inefficient is unbelievably insane.

Let’s first consider what money is. 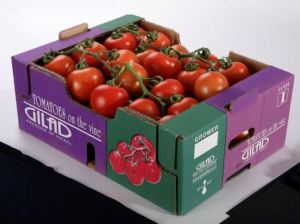 Luscious and precious resources, drawn by labour from the soil. Handle with care for God’s sake.

Now I am not some fancy pants economist in a sharp suit sitting in my ivory tower, in a corner office, gazing at the cityscape below me while I sip expensive brandy and smoke cigars, whipping some scruffy poor cunts as I cackle maniacally. I am a Burnley shit kicker to the core. If there’s some shit on your front street and you need someone to kick it, give me a call, I’ll kick that shit like you won’t believe. I’ll kick it all over the place, but I can’t give you a properly educated, text book definition of what ‘money’ is. I am sure Hayek or whatever his name is can do that far better than I.

But it seems to me that money is like a storage unit of your labour. Like a battery stores energy until you need it later. You create something of value; let’s say you grow ten tomatoes. And you trade them into this intermediary – money. You store that labour in the form of money until you need to release it and turn those tomatoes into … whatever it is you decide you require at that time.

So it’s not ‘just money’. It’s not ‘just bits of paper’ (let’s not get into a conversation here about fiat currency) it’s a representation of value someone, somewhere brought to ‘society’. You may as well be holding a box of nice big fresh tomatoes. Those tomatoes are important; they are resources that sustain life on this planet.

It seems to me that there is a secondary benefit I get when I buy a product off somebody. Let’s stick with Starbucks. When I am out and about doing evil street pickup, getting blown out, set, after set, after set, afters set, after set… every now and then I need to stop for somewhere warm and a get me touch of refreshment. And I do love me a nice slice of that creamy cocoa nectar.

So that’s one benefit I get for my £3.95 or whatever it costs. I get a comfy seat, a bit of warmth and a little slice of heaven, in exchange for my money/tomatoes/resources.

But there’s also something else I get. Something even better than the coffee. I get the amazing results of what Starbucks do with my money/tomatoes/resources. They take those resources and they utilise them effectively (as they have to be effective to compete, they are proven to be good with investing resources) they turn them into things that benefit me later down the line – comfier seats, better distribution networks, better coffee, more jobs. The more of my money Starbucks get to keep, the more they have to efficiently invest somewhere, thus creating further benefits for me down the line.

I’ve already written about my mobile phone analogy. Companies can do great, great things with their evil profits if they are left alone to go about their business of competing.

Efficient use of resources

I want people, ideally, to use my money as efficiently and productively as possible.

So when I give my money to Starbucks, I hope that it gets put to the best use possible in order to get the best benefit to society as possible. Starbucks are likely going to put their profits in one of several places.

The more of my money big companies get to keep, the better the world becomes. Again, look at what happened to mobile phones over 30 years – before you even consider the jobs that were created.

Inefficient use of resources

Let’s say Starbucks pay more tax and more of my tomatoes go to the govrnment. What benefit do we drive in that scenario? What does society get? What happens to my tomatoes and to what use are they put?

Before I say anymore, please remember I am a private contractor who for reasons of plunder, will ONLY take Government work. In the last two years I have worked ONLY for government organisations. Councils, hospitals, etc, you name it, if it’s a cesspit of parasitism, I’ll be there every day, an hour late, and willing to shirk at every available opportunity.

The amount of inefficiency in Government, I can assure you, is heart-breaking. These bullshit government jobs are truly an evil cancer on society and I can’t stress that strongly enough. Very stupid people saying very stupid things and making very selfish and cynical decisions with other peoples money, dressing their actions up as morally commendable. I’ve seen middle managers enjoy expensive lunches regularly on a Friday at the tax payer’s expense and claim they do it to create the jobs in the restaurant. They of course, hate the seafood risotto and two hours skiving on a Friday. It’s all for the poor.

Or the departmental director who bought £150,000 of the wrong types of laptop, was unable to return them, so locked them in a cupboard and said ‘it’s good for the economy to buy things’.

Governments are run on ideology not free market reality. If no one wants to buy Starbucks coffee because it’s crap, no amount of counter argument and ideology by Starbucks will allow them to survive. You’re either proving value by peoples voluntary patronage, or you’re out of the game.

A council can waste piles of money and never create anything of value and the money continues to come in. They can simply argue their way to justification. It doesn’t have to be real, just supposed. Ask any council worker if they work hard and they’ll say they are doing two jobs at once. Of course they do.

You have no choice but to keep paying them regardless of what they say.

I don’t care about the UK, I want it to go bankrupt. I hate the place. I’m leaving very soon and I will enjoy watching it sink from afar, but seeing a job done badly is just very painful to watch. Shameful. 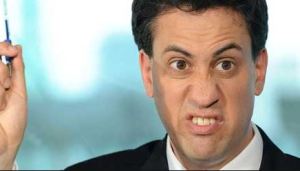 The best thing you could do mate is just get out of our way.

Well, I could write an essay on Government inefficieny. Government is simply not constrained by the requirement to be efficient. It can be as inefficient as it wants because it knows it’s customer have no choice but to keep buying their services every month (try to not pay tax and see what happens to you). As long as they are guaranteed their customers no matter their results, then they are protected from the real world effects of free markets.

In the real world the proof of the pudding is in the eating, inefficient companies simply go out of business.

Sure, some government money will do something cool, like build a children’s park or… something… but the cost of local councils to build anything is so much higher than a real world company can do it, it would surprise you.

Endless rows of bureaucrat salaries to pay, jobs take much longer, mistakes are often made. They take your 10 tomatoes and drop 9 of them on the way to the end user.

Starbucks maximise your tomatoes. Goverment cack-handedly cocks up everything from start to finish, but they make sure they get paid. They are very, very efficient at that.

The world will not be saved by taxation. It will be saved by people who can create value for others in the face of the crushing realities of the free market.

As far as I am concerned, every Starbucks latte I buy is one step closer to saving the world.

My girlfriend JJ thinks I am not very romantic. So I recorded her a song to show her how romantic I am. I told her I did a cover of ‘My Girl’, with some bespoke lyrics.

When someone mentions the song ‘My Girl’, they first think of the Temptations song, and of course, this is exactly what JJ will be thinking right now. However, there is another (much better in my opinion) song called ‘My Girl’, by the British band Madness. 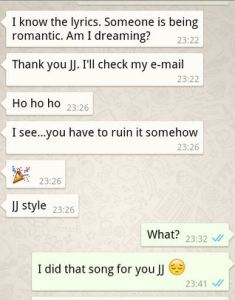 And the other shoe has dropped. I love it. Relationships can be so much fun.

If you have never heard the original Madness track, you should head over to You Tube and check it out. Awesome song.