The following is a work in progress, it is not very well written in that it reads very clunky. I will be returning to this to edit and work on over the next few days. (We all know that means that I probably never will).

Well, Christmas is now well and truly over, we’re almost a full month into the New Year and your old pal Jimmy is all cozy and tucked up, back in his little cave in Gloucestershire. Back into his little routine, back to wearing his little suit and back to tootling off to his little job in his little car. ‘Beep beep’. Turning up to work with his Frappicappilatte and croissant. His fat little red cheeky face munching away, dropping crumbs, as he frantically prepares for the morning meeting. He always makes it in early, he’s very diligent and he tries very hard.

He is lovable. Just remember, he is very lovable.

Every day is like Groundhog Day. I come home at night, record some music (badly) or get angry watching the ‘news’. Like yesterday’s Panorama expose on Vladimir Putin and tonight’s programme on Donald Trump. Fairly obvious propaganda to the rational mind. At least I have a student coming this weekend, so that’ll be a little bit of fun to be had, some ‘skirt chasing by proxy’.

So there is this theme prevalent in political discussion, which every time it comes up, I find myself pushing back. It’s such a well worn trope that trying to push back on it is like trying to tell people the earth is flat (yes, I know it’s not).

Here are my thoughts.

First of all, as far as I understand it, a one dimensional spectrum such as left/right can only measure against ONE independent value. For an impartial example – preference for bananas.

If I want the spectrum under discussion to have any value in the discussion, I also want it to be as universal as possible too. I can’t chop and change it depending on the subject matter, otherwise it becomes meaningless. So I can’t be saying far left is ‘liking bananas’ and then three minutes later I’ve changed it to meaning ‘juggling ability’ without notifying the person I am talking to.

What that means is – we have to choose one value and stick with it.

That works just fine, but obviously it cannot measure anything else if it wishes to be universal. So for example it can’t also measure juggling ability. Otherwise you get this.

As soon as you do this, it’s no longer universal because juggling ability doesn’t increase or decrease in accordance with banana preference. That is to say, as soon as you find yourself a banana hating juggler, your spectrum is blown.

It’s also arbitrary to put excellence in juggling ability next to a preference for bananas.

So a left/right spectrum has to define clearly which ONE independent value it is measuring and as far as I can see, in popular discourse, this is ever changing. When we talk about Hitler, he is always depicted as right wing because he is ‘racist’ or intolerant in some way or that he imposed state solutions, depending on the preference of the person you’re talking to. So the spectrum measures racist or intolerant/exclusive attitudes, or state solutions?

So we have a situation where Hitler is on the right because he is racist and Che is on the left because he represents the worker? Depending entirely upon the preferences of the person you are debating.

Racism doesn’t increase as one’s favour to the working man decreases. That’s just like saying, the less you like bananas, the worse you can juggle.

The truth is, left or right wing can actually mean whatever you want it to, as long as you define your spectrum up front. If you want to make it measure racism, then fine, but if Hitler is right wing, so is Stalin and so is Che Guevera.

You can’t then flip flop in the next sentence and put Che on the left because he supposedly ‘supports the poor’.

A one dimensional spectrum can only measure against ONE unique value. This is the first reason the left/right paradigm is unhelpful and misleading.

What does ‘left’ mean?

The idea of the ‘left wing’ comes from French politics. Around the time of the French revolution. The Socialists sat on the left of King Louis (I think it was). So the left wing were the Socialists.

So when we refer to the left/right spectrum, historically, the left means socialism. That means that the right means the opposite of socialism?

Racism is not the opposite of socialism. History has plenty of examples of racist socialists.

The above spectrum is completely arbitrary because racism doesn’t increase as, say, your preference for free markets increases. If Margaret Thatcher loved free markets any more she wouldn’t magically thus become a racist.

Is that maybe what we’re supposed to think though? If anyone like me talks of limiting the size and power of the state, then they’re ooh ‘right wing’. Are we supposed to think they’re dangerous if we go along with their ideas…. because if they go a bit further…. the next thing we know we’ll be murdering the Jews again. Is it a slurring tactic?

I know for sure that if I said at work ‘I am very right wing’, then it would be very bad for my career. Even if I identify as right wing, I’d have to be very careful how I said it.

This is where it gets very woolly. Everyone can have their own personal definition of what Socialism is and this is the second reason the left/right paradigm is unhelpful and misleading. Every person has their own subjective and woolly definitions of what left/right politics represents.

For me, if the extreme left is Communism – then the left is centrally planned Government solutions. It’s the most universal measure of socialism I have found. I prefer to refer to it as Statism, rather than Socialism.

Left Wing = The state. Solutions delivered through the state.

There are other things that people on the left have done. Such as wrap people up in barbed wire and roll them along the ground, or put their heads in petrol filled car tyres and set fire to them. So if we want we could make sadism the value of our spectrum, but if we ever found a sadistic conservative, then our spectrum’s use against political measurement would be limited.

So what is right wing extremism?

So if the left is centrally planned Government solutions, left wing extremism is a total command economy. Socialism, Communism, or the modern day authoritarians (often ironically called ‘liberals’ or ‘regressives’) are all examples of solutions delivered through the state. So these are on the left.

This is very important. Hitler and the Nazis, were by this measure also on the left. They were Socialists – marked by high centralisation and state control of the economy and society, pensions, schools, services – all under state control.

Importantly the Nazis also set the prices and the labour rates. They just didn’t do it overtly. They did it behind the scenes. They supposedly left industry under ‘private ownership’ but they dictated how those companies could be run. Then when things inevitably went wrong, they could blame the ‘Capitalists’ in charge of the compannies, rather than the Socialism that actually caused the problem.

By the way: Capitalism means ‘an economic and political system in which a country’s trade and industry are controlled by private owners, for profit, rather than by the state’.

So if anyone tries to tell you Nazi Germany was Capitalist – I’d be keen to ask them how that can be possibly be the case when the state set pricing, production levels and wages.

The fact is that there is no magic wand that dismisses all this and makes the Nazis ‘extreme right’ just because – ‘Dictator’ or ‘Racist’ or ‘Moustache’. It’s an adolescent narrative.

The BNP are also on the left. Read their manifestos. State control of key industry and state delivery of key services.

These horrible racist intolerant bastards we’re always told about – they are not right wing extremists by any universal or consistent measure only by adolescent narrative and incredible logical gymnastics. If someone is proposing they deliver solutions through the power of the state then that’s left leaning.

If ‘Left’ is solutions through the state then the right can only be the opposite of what the left is. So that would be solutions without the state? The free market? Maybe just the absence of the state?

Right wing extremism would be an anarchist (anarchy, by the way, is rules but no rulers). Someone who espouses entirely the requirement for state power and wants all solutions delivered outside state interference.

Ultimately, the idea that anything as complicated as interlinked political positions can be measured accurately on a one dimensional spectrum is unrealistic and totally useless, but the problem is, the theme is dominant. I try if possible to reject it entirely. A much better measure, but still not perfect is something like this image. 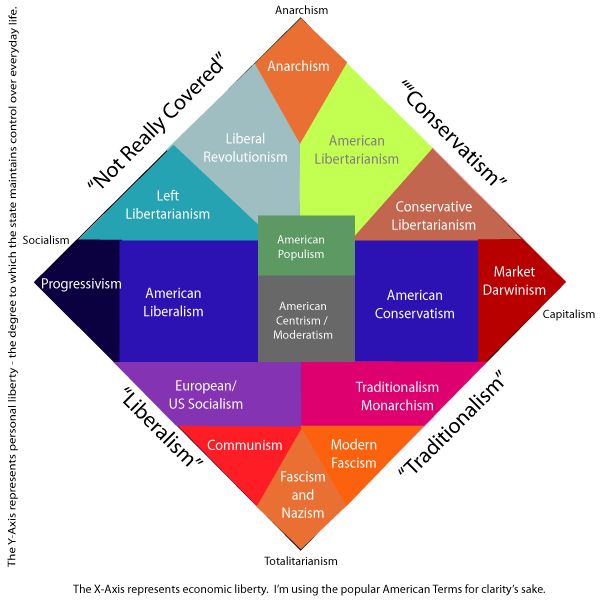 Notice how on this image above, Communism and Fascism are next each other. Hitler and Stalin are close bed fellows. Not opposite ends of a left right spectrum.

We’ve been fed for decades some woolly idea that politics looks like:

This is by no means the last word on the discussion. It’s just what I notice right now in terms of a lot of the inaccuracy in this particular subject. If someone talks to me about left and right wing, I ask them to define their criteria of measurement – because otherwise, if I don’t know their criteria for measurement, then I am just not having a conversation of any merit.

I look for their criteria to be consistent and universal and if it’s not, I push back. I don’t let them put ‘anti immigration’ on the right next to ‘free markets’. It’s nonsensical. I remind them that a libertarian or an anarchist would be extremely right wing and would propose both open borders and free markets, I ask them to explain that and sense check that their spectrum is not too narrow, inconsistent or short on logic.