A live example of a truly great DHV story

Earlier on today, on Twitter, Hector Beaman (Be A Man, geddit?) tweeted the virtues of DHV stories. Good for him. It’s an art and an aspect of pickup I see few people understanding or doing. Yet it’s a great way to pad out your character, build comfort and generate huge attraction. I guess, until you experience it, you can’t really see how brutally effective it can be. 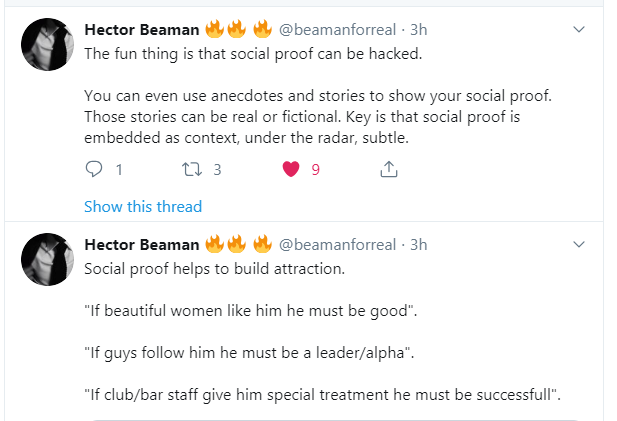 Now, for further background, I’m currently recording a short series of podcasts with my friend John Wisdom. We have four episodes backed up so far. We need to 6 or 7 before we finish the series and release them. I’m not really into writing, but I’m double comfortable waffling on. Yeah,  put me on a stage or behind a mic, wind me up and watch me fucking go. I’ll jam my outlandish opinions down your hoop all the long day.

So I started listening to a few different podcasts to get ideas for structure etc. I listened to Ricky Gervais, Joe Rogan, etc, and this is how I found recently a golden nugget of a podcast called ‘Spittin’ Chiclets’. It was on this particular podcast that I heard an amazing example of one of the best, totally natural and perfectly delivered DHV stories that close to knocked me to the floor. Just wait until you hear the punch-line.

This particular podcast struck a chord with me and I have been listening compulsively. It’s so …. joyously masculine. When I hit my early teens I was following my local football club regularly, who at that time played in the basement division and was closer to semi-pro as it was to pro. Most home games I’d go on with friends from school and we’d stand at the back of the terraces with the daft lads. They were glorious days, everyone stood in roughly the same spot every week so you always knew where to find someone, friendships were born, banter was shared, stupidity was encouraged and legends were made.  Oh for those days again boys, oh for those days again. It was the days before seated stadia and political correctness. Lads were lads. You wouldn’t get a life ban for swearing or singing ‘get your tits out’.

The away games were a different story. We were too young to drive, so for option A we’d use the busses the supporters clubs organised, but that was expensive for us back then. It may have only been an additional £10 for the bus, but we weren’t working lads, we were at school. Option B was the chosen option. My cousin and I would go with our dads’ and their mates. This meant free tickets, free travel and best of all free beer.

At 13 sitting in a pub with my dad and his mates supping ale and going on the football, I grew up quickly. By the time most of my school-friends discovered alcohol, I’d seen it and done it. I was never one for ‘sneaking out’ to the local park and sitting in the dark drinking cheap cider in the cold that we’d managed to get an older lad to buy us from the off license.

I was too young yet to go to bars and clubs at night on my own, but now too mature to sit in the park with those I considered ‘kids’. So my preferred option at 13/14 was to hang out with my cousins, my brother-in-law and their mates. They were all 30+ and proper lads. They were working lads who had a bit of cash, shagged women and had loads of stories about going places, getting into situations, fighting, drinking and most of them had been in the army at some point, a few had been in prison. I remember one of the lads was semi friendly with the band Oasis, and another lad, who we called ‘the Prince’, cycled through hot girls like they were going out of fashion. Another lad was driving sports cars once a month down to Monaco in some kind of criminal endeavour with a gang from Liverpool. Another guy was renowned as being one of the hardest lads in town. He’d build a reputation going round the local towns and battling for 10 years before he’d calmed down and had a family. They all wore top lad clothes, had wallets full of money and went to places like Thailand and Ibiza. So at 13 I was getting a window into a world I couldn’t yet possibly have experienced for myself. I was getting an education in how to be a right fucking lad.

Everything I spoke to my school friends about was extremely tame and childish in comparison. ‘What colour G string do you think Kerry Parkinson wears’, they’d whisper and then go quiet as she’d walk past. Eventually, we all grew up too and now we’re the lads sitting around the pub, talking about travelling the world and sharing fighting and kill stories, cycling through 100s of Kerry Parkinsons, getting ourselves into tight spots and even having kids.

Where do we go these days to get a masculine kick, to hear lads talk without getting the sense they’re looking over their shoulder fearing some lurking feminist? Well, I’m a big hockey fan. I have liked it all my life. I used to take my nephew, the one who got ill, to watch the Blackburn Hawks in the 90s. We loved it. We loved the game and I wish we’d have gone more. I was 15/16 at that time so he would have been 8/9. My nephew was a natural athlete. Excelled at every sport he turned his hand to. He had both City and United scouts came to watch him for their academies, but alas he didn’t quite make the grade. I used to love the NHL, but back in the 90s it was hard to watch as there’d be some games on Sky TV but you had to just hope they’d schedule something. Nowadays you can watch every single game on demand on NHL.tv.

Spittin’ Chiclets is great. You probably need to be interested in hockey to enjoy it. It’s from Barstool sports, which I think is run by this semi red-pill guy David Portnoy. It’s very popular, I think they said they has 100,000 listeners a week, but they may have said 500,000, I can’t remember, but it’s popular. Sure they talk about hockey, but that’s not the purpose of the podcast. Here’s a review:

“Very interesting podcast with interesting guests and lots of behind-the-scenes stories. It’s like sitting at a bar listening to old hockey players talk. My only complaint – and I realize this show is likely aimed at young men and that I’ll be dismissed as a puritan – is the constant use of foul language. On the one hand, I guess it’s natural, but on the other hand, it’s distracting. A listener needs to filter out the superfluous curse words to hear the actual substance. I also don’t feel comfortable listening when my kids are in the car. Anyways, it’s good that this show exists and that all these great hockey stories are being relayed and recorded.”

These boys don’t give a fuck. They seem to say whatever they want. It’s lads, proper lads, sitting around and talking about travelling, drinking, fighting, farting, shitting, playing golf, banging loads of girls, drugs, wild nights out with the lads and just being generally joyous, especially in their masculinity. It makes listening to sad little limp dicks like Linekar and Shearer on ‘Match of the Day’ impossible. In fact, it’s like being back with the boys in Burnley, lads being joyous and freely talking as if political correctness didn’t exist.

I was sitting at work being spammed with daily diversity and inclusion emails and having to hear people talk about how we can ‘fairly distribute the projects across the genders in our department’, or how stupid Trump is, or if I was lucky, just have to listen all day long to the TV they have on the wall that constantly plays BBC News. It was obviously a challenge for my vibe.

Then I found ‘Spittin’ Chiclets’ on Spotify and my vibe improved the second they started swearing. Now I’m not only shielded from the tsunami of soy from the corporate world, I’m transported to a world of proper top lads shamelessly being men and having a top time, shitting their pants in Vancouver airport and having to wash down in the bathroom, but still managing to notch the girl at the bar. My vibe is flying since finding this idiocy.

So to the DHV story, let’s take a look at it.

A guy called Nick Kypreos (don’t hit that link unless you have a strong stomach) tells us a story from his playing days.

39:50 – Nick explains his coach issues a challenge to the players. The player who delivers the most ‘hits’ in the season, wins a truck. A ‘hit’ in hockey is checking a guy so hard you knock them sprawling to the floor. So this is tough stuff, you’re knocking men down and driving trucks. He’s let us know that that he’s in a sturdy guys’ world and that he can handle the slings and arrows of this world. I’d say this is a confidence DHV, since he’s showing he can compete with the top guys.

39:53 – ‘My eyes opened up like manhole covers’. This is fun emotive language. And it’s important for what comes later in the story. We understand that he really likes and wants this truck.

Now that’s a good DHV. But it’s not great. For a DHV to be great, you need a pay-off. A punch-line that makes you laugh and distracts from all the humble bragging.

40:27 – And there it is. Protector of friends and family. After all that, it was all for his old man.

Now that’s a DHV story. That was funny, compelling, impressive and endearing. How many stories like this can you tell on dates and in set? Back in the day I had about 10 of these. If you don’t have any, it’s time to go out and make some. Learn the attraction switches and actively push yourself to do things to be that guy.

It’s sure harder than learning a few snappy lines but dates can be long if you don’t have sturdy material. Story telling was a huge part of my style and I used to go 1 for 30 in day game. I’m sure there’s many better than me, but there’s many worse too.